It’s been a while since I warmed my hands at the fiery forge of Babylon’s burning.  One thing I’ve been busy with over the past semester is designing and test-driving a hybrid version of a course on Walt Whitman.  This was a crazy and wonderful experiment  – – not so much in “translating” a traditional course into semi-virtuality, but in devising ways for students to engage with new media as a platform for learning and creating.  Most thrilling  effect: the community of practice that students co-created.  Criteria of success: “This class was, for me,” one student wrote in her final blog post, “an adventure in liberation.”

For my students’ final projects, I opened the door wide.  After a semester of talking, blogging, tweeting, reading, writing, and mining the Whitman archive, I asked the students to make something that demonstrated their understanding of Whitman’s poetry and represented their learning.  Initially, this puzzled the students.  Where was the final essay or final exam?

After passing through this slight phase of confusion, the students began to really explore how they could show me what they’d learned without writing a final essay.  This “problem” required some rethinking of how to best represent learning and some grappling with how to use non-five-page-essay media to perform this task.  I introduced some possible tools – – glogster, youtube, prezi – – but a lot of the work of guiding students through the final project occurred in one-on-one conversation and conferencing.

The results were amazing and, yes, liberating!  Students produced everything from YouTube videos, to remix poetry, to mixtapes, to zines, to music mashups.  Here, then, is a sampling from my students’ maker faire.  (I’ll save some brief elucidating commentary until the end of the post.)

Miguel P., who had blown us away throughout class with his video mashups, decided to connect his interest in music and music production with a Calamus poem. Give it a listen!

(Here’s his self-reflection on the whole process.)

Todd E. decided to enact the changing poetic personas of Whitman from the 1855 to “Deathbed” editions of Leaves of Grass.  Here’s his video of the post-1855 Whitman, blue-penciling Leaves of Grass.  (All three of his videos, including a self-reflective video are here.)

Meghan E. decided to do some blackout poetry on Whitman’s Specimen Days: 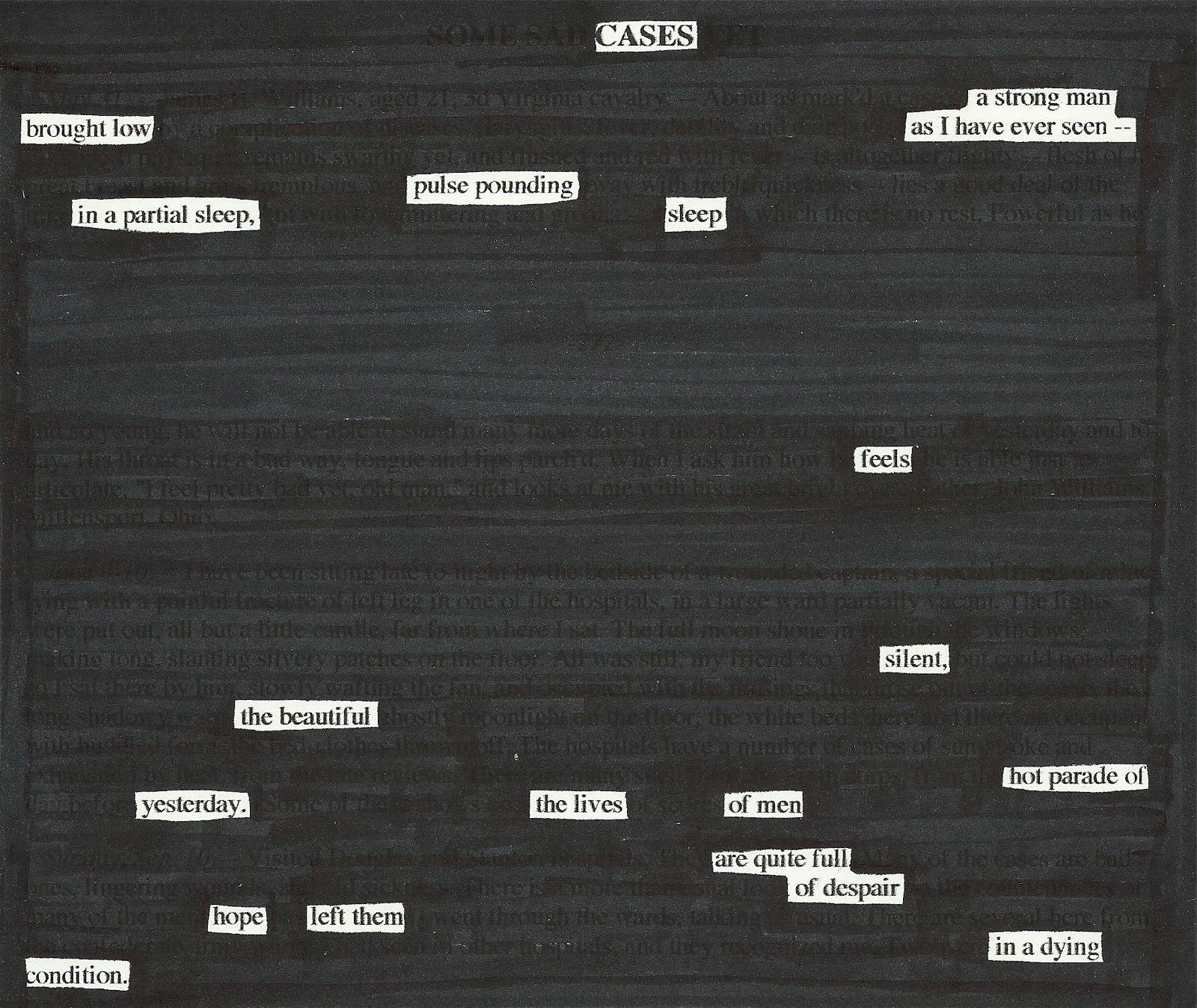 Eric A. produced an online pop-up edition of some of Whitman’s greatest hits (click on the image to get the full pop up effects): Alina A. shot a “reader-response” video of readers reading Whitman: Max G also created a zine –  – more in tune with the formats and design of the local S.F. zine scene: And, Erick M. created an incredible artist’s book based on his reading of Whitman: I could go on and on (and if you buy me a pint of Racer5 at Cato’s Ale House, I will).  There were so many other great projects – – including student remixes of Whitman’s poems and their own.  In the end, what amazed me was the supernova of creativity unleashed by my students, the overwhelming surge of experimentation, ingenuity, and artistry liberated from the demise of the five-page essay.

The need for creativity has, of course, been a hot topic in the popular and semi-professional press lately: Jonah Lehrer’s Imagine: How Creativity Works, Ken Robinson’s  Out of Our Minds: Learning to be Creative, Newsweek’s “creativity crisis” article, etc.  Suddenly, creativity has become a central challenge to education and, perhaps, a possible breakout from our current economic crisis.  I’m reading and thinking a lot these days about the meaning and consequences of this discovery of creativity.

But, for the moment,  I want to pick up on one of the seminal essays/blog posts in Digital Humanities: Stephen Ramsay’s “On Building.” Briefly, Ramsay argues that what distinguishes digital humanities from business-as-usual is the move from “reading and critiquing to building and making.”  “If you are not making anything,” Ramsay quotes himself from a 2011 MLA presentation, “you are not  .  . . a digital humanist.”  I see what Ramsay means.  From his perspective, rather than “just” writing essays or books, digital humanists design and build things like databases, applications, software, and networks.

Still, there are at least a couple of problems with Ramsay’s linking of building to digital humanities.  First, more generally, writing an essay or book is building something.  Like making software, writing an essay, for instance, requires expertise, technical knowledge (how to use databases, word processing, books, etc.), mastery of various media, and craft.  In other words, despite the kind of animal laborans versus homo faber (cf. Arendt’s The Human Condition) distinction Ramsay tries to make,  we’re all makers and builders.  We simply use different materials, media, skills, knowledges, etc.; digital humanists just operate a different kind of “making.”

Second, in my Whitman class, students were “making” and “building” things both within and outside of the digital – – flash-driven web-based pop-up texts and xeroxed zines.  In other words, we shouldn’t confine the virtues of making – – in Ramsay’s strong sense – – to the digital.  Reinvigorating the humanities requires that making and building become fundamental to the full range of humanities practices – – teaching, learning, and scholarship. (To stick with Arendt’s distinction between  laborans as repetitive, ephemeral, dull work driven by necessity versus faber as self-reflective, skilled work dedicated to making the artifacts of public life: what could be more laborans-like than the five-page essay and school writing in general?)  For too long, the institution of the humanities has abrogated creativity to the very particular act of artistic creation – – a restriction that may be Ramsay’s real target.

In this more general sense, probably the most important book for digital and other humanists to read right now is Richard Sennett’s The Craftsman.  (I’ve been a big fan of Sennett’s since the way-back days of The Hidden Injuries of Class – – but his latest work on “new capitalism” has been nothing short of mind-blowing.)  Sennett’s book is an extended argument for the idea that “people can learn about themselves through the things they make, that material culture matters.”  The path to a more “humane” (could we say, more humanistic?) life depends on  understanding the craftsman because, according to Sennett, the “craftsman represents the special human condition of being engaged.”  This kind of engagement is complex, drawing on expertise, skill, and creativity, but it’s the kind of engagement that can produce stunning and enduring moments of learning and knowledge.  Work  – – especially student work – – that not only reflects what is learned but enacts learning and knowledge as self-making processes.

Not convinced?  Go back and listen to the sonic and intellectual pleasures of Miguel P remaking Whitman’s Calamus poem.